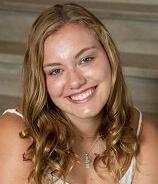 Hope Eldridge has been named the winner of this year's SAR award, and Taylor Martin has earned the DAR award. These are well-known and significant honors presented to seniors demonstrating the qualities of dependability, service, leadership, and patriotism, and to an outstanding degree. Eldridge and Martyn were chosen by their fellow seniors and by faculty. They'll be recognized during the Senior Awards Program in April.

Eldridge is the daughter of Tim and Kathy Eldridge of La Salle. She's involved in many activities at L-P, including Key Club, Renaissance, Track, Link Crew, Harbor Homeroom, and Basketball. As for her future plans, Eldridge intends to further her education, studying Biology at Loyola University with plans to pursue a medical career.

Martyn is the daughter of Michael and Tammi Martyn of Oglesby. She's involved in many athletics and activities at L-P, including Volleyball, Basketball, Softball, Link Crew Commissioner, Super Fan Leader, Student Board, Harbor Homeroom Leader, Student Council Vice President, and a Student Rotary visitor. She is an Illinois State Scholar. As for her future plans, Martyn has the goal of attending a four-year university, where she will play softball and major in health science with a goal to become a Physician Assistant.