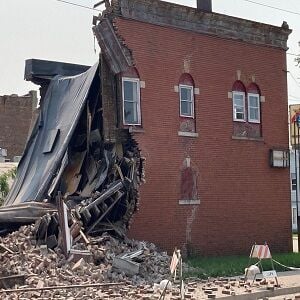 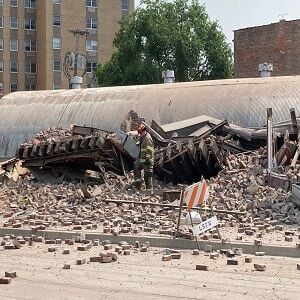 Urban renewal can include a building simply collapsing – without warning.

Part of an old bar at First and Tonti in La Salle gave way just before 10am Monday. Manpower and equipment finished it off during the afternoon. Now, it's an empty lot. La Salle Fire Chief Jerry Janick explained how they became involved:

Though the city considered it abandoned, a thorough search was conducted before tearing down what was left of the structure. Nothing was found and no one was hurt during the collapse. One nearby resident said, that when it fell, it sounded like a dump truck. Dust filled the air for 10 – 15 minutes.

La Salle Building Inspector Andy Bacidore says the city has been in court with the building owner Marcus Williams of Streator for a couple of years due to the building being unsafe.